Foam and Your Health 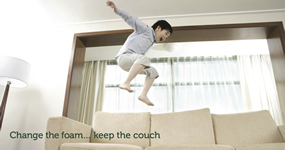 For a Healthier Home

Keep the couch you love while saying goodbye to toxics. Sign up for the Safer sofa foam exchange...

Replace the foam filling in seat and back cushions, where 80-100% of flame retardants are found. Furniture foam professionals are ready to remove that old foam and refill with new high-quality, flame retardant-free replacements.

Foam products are found in almost every area of life, from your sofa and bed to clothing and packaging. It is one of our goals here at FoamOrder.com to assist the planet by helping people switch from conventional foams to natural foam products like latex. Latex is a natural product and biodegrades within a couple of months, when exposed to the elements. Conventional foams are a derivative of gasoline.

We provide this section as a forum for information on foam. If you have additional information you would like to see posted here, you may email it to us.

Program seeks to get harmful chemicals out of furniture
When Lori Yonelunas decided to detoxify her life, she knew she had to do something about her toxic leather couch but was reluctant to get rid of it. The Campbell woman understood that the foam in her relatively new eight-cushion sectional contained harmful flame-retardant chemicals. “Once you know (about the chemicals), how do you keep sitting on your cushions, knowing you’re poofing up cancer?” she said.
November 23, 2013

Danger Lurks in That Mickey Mouse Couch
Researchers this summer purchased 42 children’s chairs, sofas and other furniture from major retailers and tested them for toxic flame retardants that have been linked to cancer, birth defects, diminished I.Q.s and other problems. In a study released a few days ago, the Center for Environmental Health reported the results: the toxins were found in all but four of the products tested.
November 28, 2012

Flame Retardants From Furniture Found In Household Dust
Sofas and other cushy furniture often contain chemicals intended to reduce the risk of fire. But those chemicals may pose health risks of their own, and some researchers are trying to build the case for getting them out of the house altogether. Eighty-five percent of couches tested in a new study contained at least one flame-retardant chemical in the foam cushioning.
November 28, 2012

Chemicals in furniture hard to avoid
Toxic flame retardants pervade the nation’s households, especially California’s, and little can be done to keep them out of our bodies, two new scientific studies find. The studies, published Wednesday, arrive as state and federal lawmakers are pushing for stricter regulations on potentially hazardous chemicals that go into furniture, electronics and other products.
October 31, 2012

Toxic Flame Retardants In Foam
There is a flame retardant story in California worth considering. California senators voted to allow toxins in all U.S. upholstered furniture.
May 22, 2012

Fight Over Flame Retardants In Furniture Heats Up
If you pick up a cushion from any sofa or piece of furniture that has foam, you’re likely to find a small white tag that reads: “This article meets all flammability requirements of California Bureau of Home Furnishings technical bulletin 117.” The law, referred to as TB 117, was passed in California in 1975. Some scientists and lawmakers are now starting to think this policy, designed to make us safer, might actually have the opposite effect.
September 23, 2003

Study finds flame-retardant chemical in U.S. breast milk
A common chemical flame retardant was found in the breast milk of 20 U. S. women at levels that were much higher than those found in European women, according to a study by an environmental advocacy group. The report by the Environmental Working Group recommends that the U.S. Environmental Protection Agency ban the use of PBDEs, or polybrominated diphenyl ethers, some of which are already prohibited in the European Union.
March 12, 2003

Dangerous chemical found in women’s breasts; Bay Area levels higher than Europe, Japan
Bay Area women have three to 10 times greater amounts of a chemical flame retardant in their breasts than either European or Japanese women, says a study by California scientists published Tuesday. PBDEs, or polybrominated diphenyl ethers, are persistent organic pollutants that have been increasing worldwide in humans and wildlife over the last 10 years. The levels found in San Francisco Bay harbor seals are among the highest in the world.